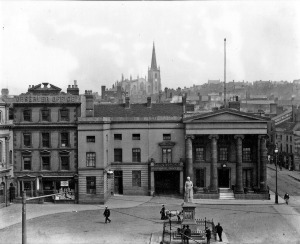 It may be hard to believe today, but the heart of Walsall, The Bridge, was once graced by two generations of great inns.  Both named the George Hotel, the first was probably built in 1781 (Frederick W. Willmore says 1721) by Thomas Fletcher, the other replaced it in 1935.  Local historian, photographer, artist and draper Billy Meikle had the privilege of knowing both these establishments very well. 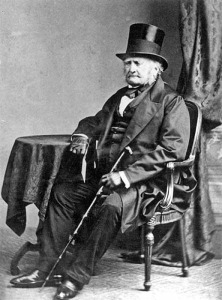 Located at the junction of Digbeth and Bridge Street, the first George Hotel, as Walsall’s top coaching inn, placed the town firmly on the map and, with assembly rooms added in 1793,  was an important centre for travellers and townsfolk alike long before the railway came to town.  The hotel accommodated many distinguished patrons, notably the Earl of Derby and Lord Hatherton.  It was also used as the headquarters of the local Conservative Party and was the scene of many disputes and riots during the lively elections of the nineteenth century.

The George Hotel and The Bridge before Sister Dora's statue of 1886. (Walsall LHC)

In 1941, Meikle recounted how the old George had started out as “an ugly square Georgian building”.  According to Billy, two other Fletchers, brothers, were once proprietors of the Dragon Hotel in High Street, which Thomas had owned before building the George.  Apparently the brothers fell out and one of them, Richard Moore Fletcher, bought the George Hotel.  This must have been no later than 1813, as Pearce’s History & Directory of that year records Richard Fletcher as being of the “George Hotel Posting House, Traveller’s Inn and Coach Office, Digbeth”. 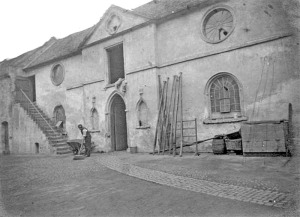 Fletcher rebuilt and expanded the George between 1821-1826, making it into, as Meikle says “one of the finest coaching houses in the country”.  Willmore noted that the hotel had stabling for one hundred and fifty coach horses.  In 1823 Fletcher added four great stone columns to a new Bridge Street entrance as part of a grand neo-classical portico.  According to Willmore, the columns, from Fisherwick Hall (demolished about 1804) near Whittington, Staffordshire, were purchased from the Marquis of Donegal in 1822 “for less than the actual cost of conveyance”.

The mighty columns and portico of The George Hotel, early 1900s. (Walsall LHC)

Meikle states however that a part owner of the building, Mr Frank Yates, told him the pillars were given free of charge to Fletcher, on the condition that they were never to be painted.  The hotel’s original entrance, in Digbeth, was much more modest, as Billy reveals in a watercolour based on an 1820 sketch by R. Fox, being a simple doorway up a few stone steps with some railings.

The old entrance of the first George Hotel, from a sketch of 1820. (Billy Meikle)

Billy Meikle says that Richard Fletcher was a remarkable character and a great benefactor to Walsall, and controversially states that it was he (not Thomas as recorded by others) who was the chief instigator of straightening the road from Scott Arms into Birmingham through Birchfields, replacing the previous bad, hilly road via Handsworth.

Meikle provides a sketch of a deed signed on November 26, 1830 by subscribers to the new road, each contributing £200, including Richard Jesson, Richard Moore Fletcher and J. Heeley of Walsall, John Gough of Perry Hall (subscribing £1,500), John Vaughn Barler of Perry Barr, Richard Fowler of Erdington, George Bragg and William Houghton of Birchfields, and a farmer, Charles Gallimore.  This needs to be looked into further.  In addition, Meikle states that Richard Fletcher also straightened a series of crooked lanes which now form the main road from Walsall via Stafford Street, Leamore, Bloxwich, Wallington Heath, Churchbridge and on to Cannock and Stafford.  These changes all benefited coach travel and local business. 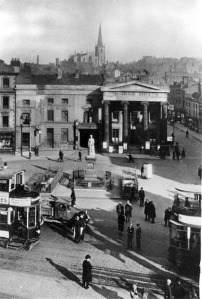 Many coach services were run by the hotel, but with the rise of the railway this dwindled, until in 1893 Billy Meikle was one of a party which took the last journey in a coach owned by the George.

On that day the Duke of York and Princess May were visiting the Earl of Bradford at Newport House, Castle Bromwich, and were due to attend a service at the local church.  The George Hotel party left Walsall with the full intention of entering the church, but there was such a great crowd of Birmingham folk and policemen that they could not even approach the churchyard on their arrival.

The trip was not, however, entirely wasted – they made for the Bradford Arms, a fine old Queen Ann building which, as Meikle says, had “escaped the attention of that Arch Vandal the Brewer.”  They were sadly unable to obtain lunch there, so the coach proceeded onward to the Royal Hotel at Sutton Coldfield where they had better luck, and following a fine luncheon the party, including Billy Meikle, had their photograph taken outside the hotel.

Sadly, as Meikle reflected, by 1941 most of the people in that photograph had passed away, and the great days of coaching and the old George were but a fading memory. 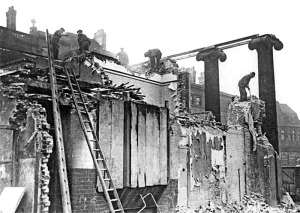 In 1933, it was decided to replace the grand old George Hotel with a new building. And so Walsall’s greatest Georgian inn was consigned to the dustbin of the past in one of the worst examples of historical vandalism ever to take place in a town which was to become well-known for such acts. It was in many ways the beginning of the end of the great days of Walsall.

The second George Hotel, not long after completion, 1935. (Walsall LHC)

Nonetheless, the magnificent new ‘Art Deco’ George Hotel of 1935, a creation of the era of steam, the motor car and the trolley bus, would also be a prestigious ornament to the town for many years, before itself falling victim to the vandals of ‘progress’ – but that is another story.